The DC3 algorithm is a powerful linear time suffix sorting algorithm. If you’re not familiar with suffix sorting, it is the process in which you sort the different parts of a single string. For example banana suffix sorted would be:
a
ana
anana
banana
na
nana

Efficient suffix sorting is needed in data compression, and substring matching. Practically speaking, suffix sorting can be used to search for text in an ebook, identifying long repeated sequences of DNA in a genome,  etc.

The most obvious way to suffix sort is to use a n*log(n) comparison algorithm to compare all the suffices of a string. However in the last 20 years, faster linear time suffix sorting algorithms have been developed. These algorithms beat the n*log(n) barrier by avoiding redundant sorting associated with suffix sorting. For example, from the banana suffix sort above, if you have sorted “ana” and “a”,  there is no reason to compare the entire suffices “nana” and “na”. Once you determine that they both start with “n”s you should just use the  result of the “ana” and “a” sort. The DC3 algorithm uses this rationale to create an elegant solution for linear time suffix sorting.  I’ll explain this algorithm by first exploring the process behind it and then by examining a java implementation I created.

The easiest way to explain DC3 is to go through an example and explain relevant points along the way. To do this I will sort of the string “yabbadabbado”.

Before we can begin sorting, we must first determine which indices are part of the “sample”. For DC3, we create a sample from the indices that are not divisible by 3. In mathematical terms, that means the sets B1 and B2 from the formula below where n is the last index in the string.

After we have created B12, we radix sort the first three letters found at each index to get the sorted order of B12.(Note that when I say “letters” I’m not referring the traditional alphabet but the integers that replaced our ASCII characters) When we finish the radix sort we can rank each index based on the letters we found radix sorting. Heres what the result looks like. 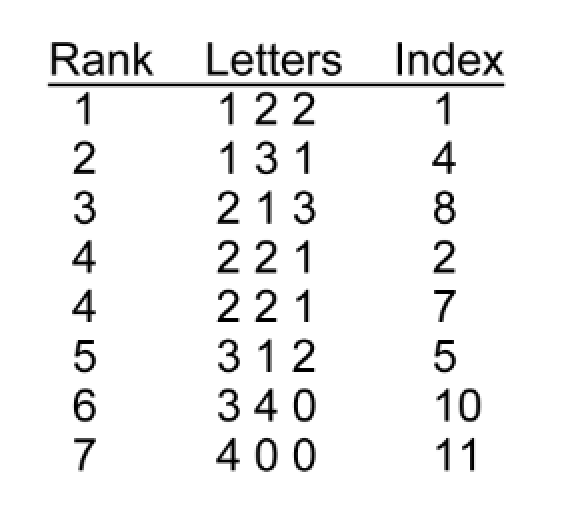 Theres a few important things to note. One, the positions 2 and 7 get the same rank, 4, because they point to letter sequences that are equal. Two, the index 11′s letter sequence is 400. The extra zero, the one after the data sentinel, comes from the “filler” we allocated before we started sorting. Had we not allocated filler we would have tried to access unallocated memory during the radix sort and caused an error.

Evaluating the Results of Radix Sorting the Indices of B12

Unfortunately, since two indices, 2 and 7, have the same rank we must resolve the collision and figure out which index truly has the 4th rank. Fortunately theres a fast linear time suffix sorting algorithm called DC3 that can solve this for us. That’s right, we’ll use recursion. To do this we’ll rename each index with it’s rank. So now we have:

Notice that we added 3 zeros to our new array. Again this is useful during radix sorting. We sort this new string with DC3.

The recursive DC3 call proceeds exactly like I have described so far. We determine the sample suffices, and we radix sort them. I’ll skip explaining these steps but show them in the diagram below. 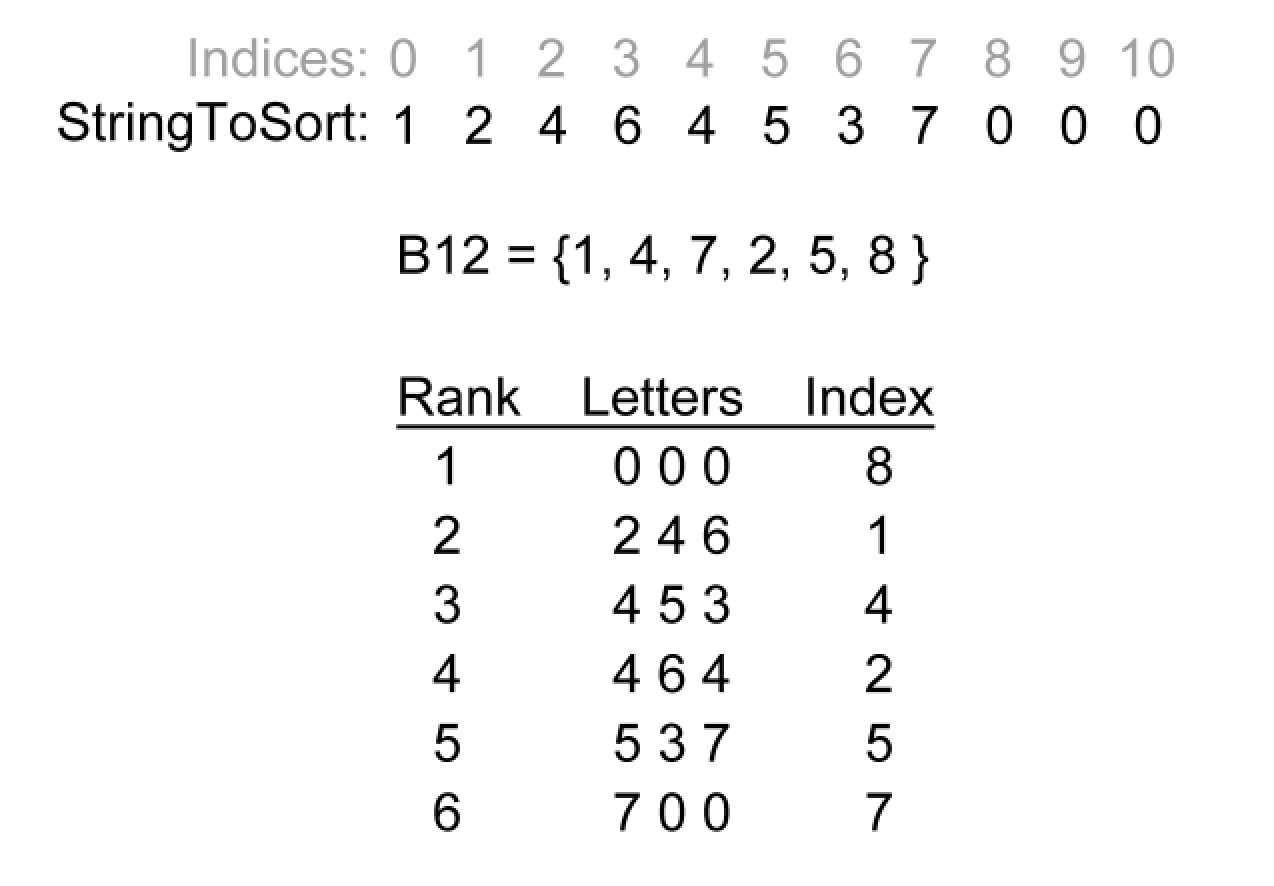 Sorting the Nonsample Suffices (Still in the First Recursive Call) 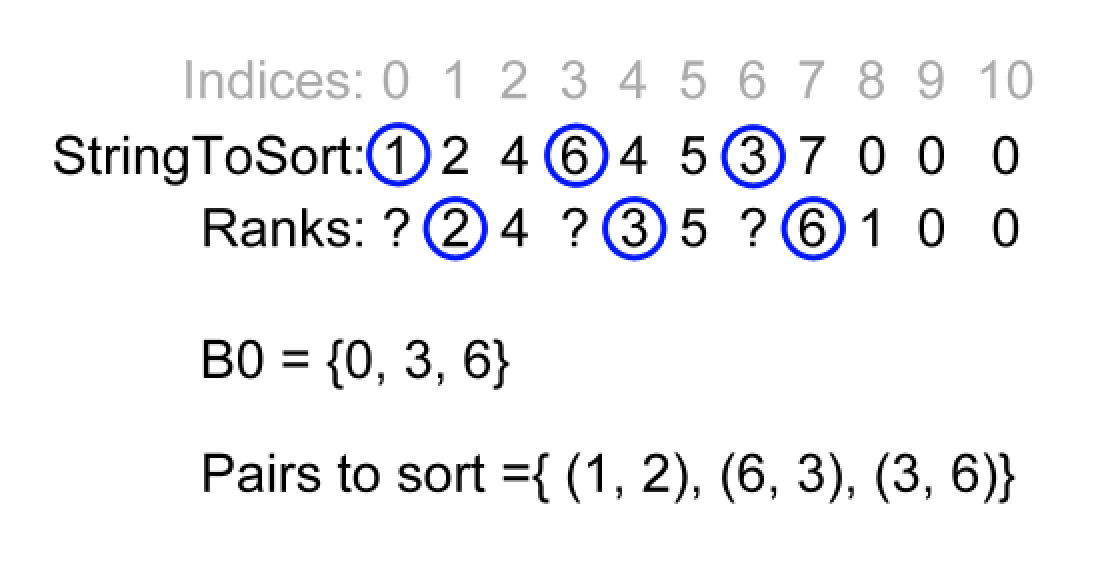 Notice that we made the ranks of the filler positions  0. This helps us avoid accessing unallocated memory and allows us to sort the non sample suffices correctly. Next we radix sort the pairs:

Merging B0 and B12 (Still in the First Recursive Call)

Let bo and b1 be the indices we are trying to compare from sets B0 and B1 respectively. In this case, we first compare the letters at the indices b0 and b1. If there is a tie, we will compare the ranks located at b0+1 and b1+1.

It’s important to note that there can never be a tie during the comparisons of this stage. This is impossible because the final stage of each comparison employs comparing two different ranks. We know each rank is unique because the “sample” sorting phase either discovered that we had uniquely sorted the sample indices or called upon DC3 to create a unique ranks.

Now lets look at these rules in practice by getting back to our example. Below is a detailed look at how the merge proceeds. 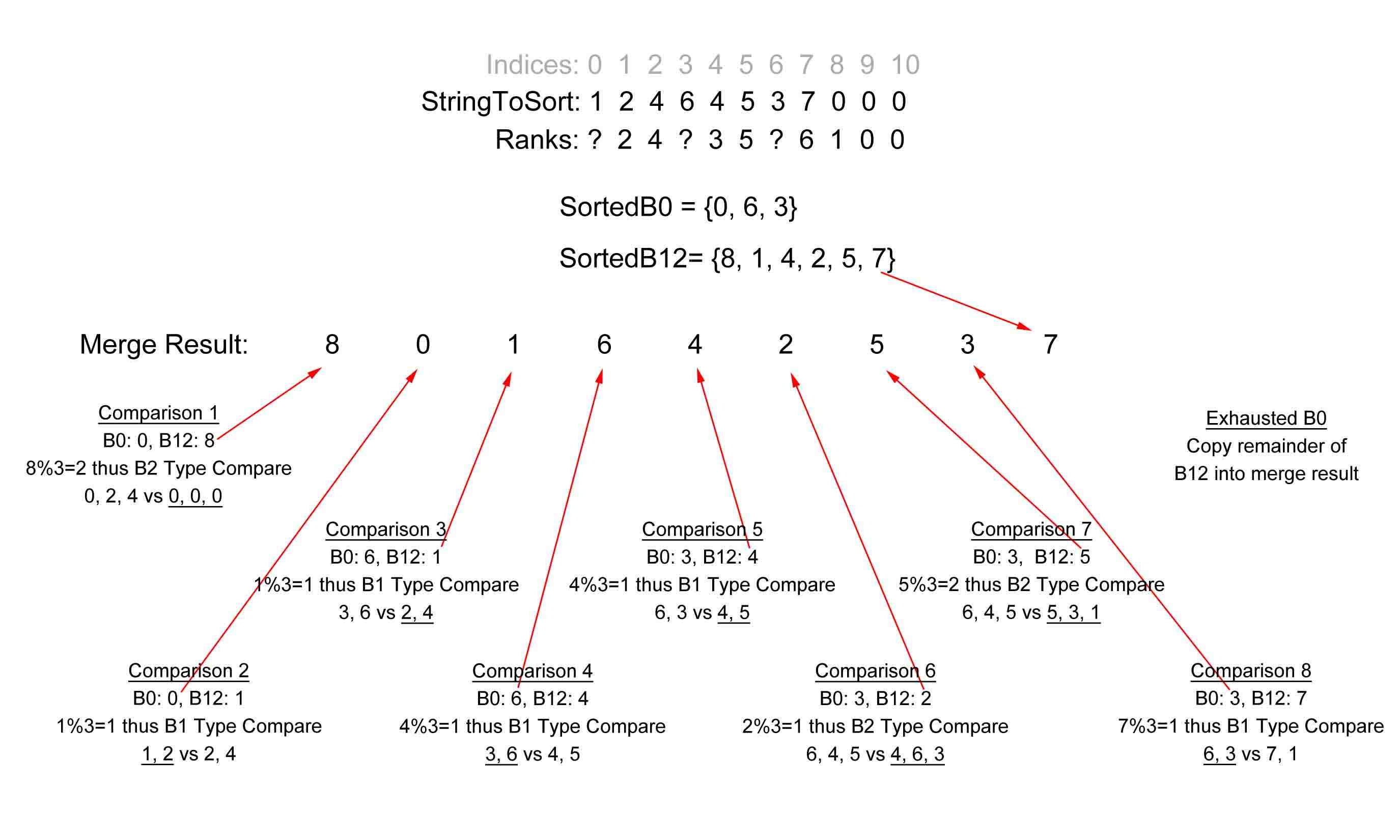 Finally we are done with the recursive step of this problem! Lets take a look at where we stepped into recursion and figure out how to interpret the result.

Coming back from Recursion

In the sort of “yabbadabbado” we stepped into recursion because we couldn’t uniquely sort the sample suffices B12: {1, 4, 7, 10, 2, 5, 8, 11}. Now we have have the sorted order of these indices after being replaced with their ranks. We can use this sort to uniquely sort B12. This part is confusing so reread the next paragraph if you don’t understand at first.

The rank replacement allowed us to sort the “value” at each index. This value was based on the first three letters found at the index. The recursive step sorts these values further and in the process finds a unique sort. By sorting only the values we can effectively compare more than 3 letters at a time. For example in the first level of recursion you compare the values of  the values generated during the first (non recursive radix sort). The values at the first level of recursion would then be based on 6 different letters. Another important thing to note is that we find a unique sort relatively quickly. Each time we step into recursion we reduce the input string’s size by roughly one third. An input string of any size is quickly reduced to small problem. This allows DC3 to run in linear time. I’ll look at the running time in detail at the end of the Process section.

Getting back to our example, we can use the return value from the recursive step, {8, 0, 1, 6, 4, 2, 5, 3, 7}, to create a unique sort for B12. Lets call the returned array recReturn, for “recursive return”. We can sort B12 by traversing recReturn  from 1 to recReturn.length-1 and using the value at each index of recReturn to index into B12. The value we find at B12 is placed into the next value of our growing sorted B12 array. Theres a lot of indexing into arrays and a diagram can help clarify: 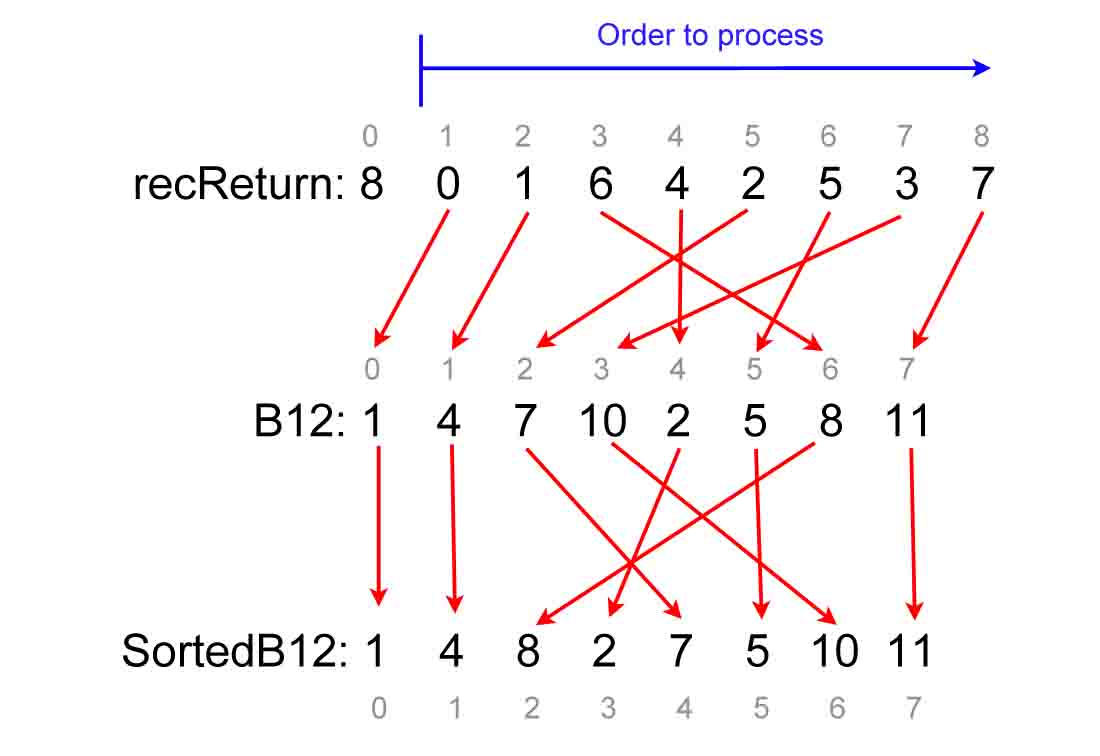 Notice that we skipped the first index of recReturn. We did this because it is always the “mark” zero that we added. We don’t need it to create sortedB12.

To finish interpreting recReturn we need to create ranks for each index in B12. Luckily this step is easy. We traverse sortedB12 and use the value found at each index to index into our ranks array and update value found with a simple counter. 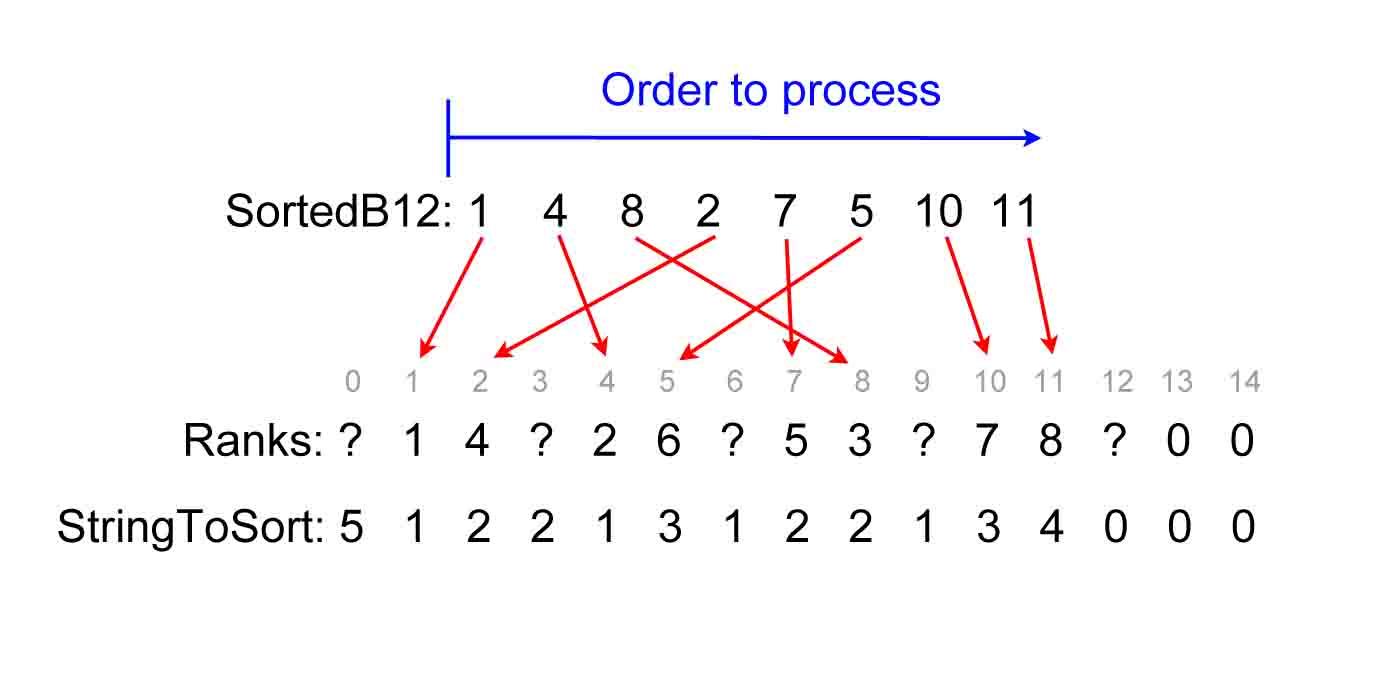 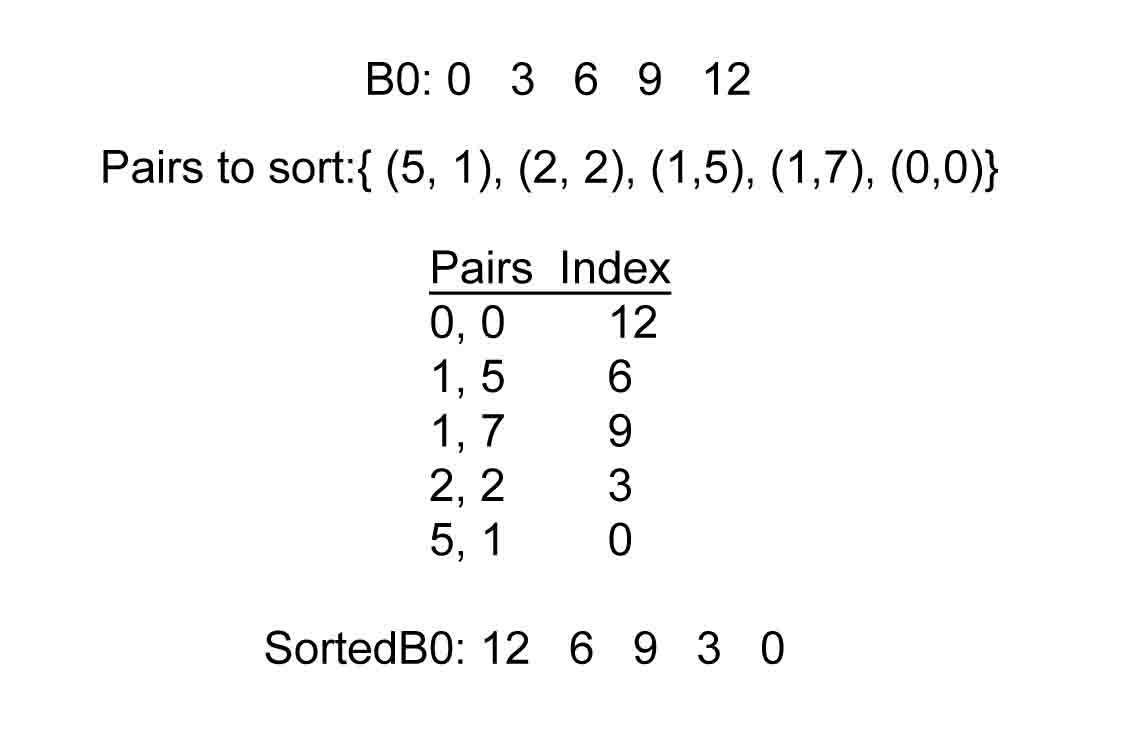 Now we merge sortedB0 and sortedB12 just like we did previously.

Heres the suffices that each index corresponds in the original string, “yabbadabbado”.

As you can see, the DC3 algorithm has sorted our input string! Before jumping to my java implementation of DC3 I’d like to look at the running time of the algorithm.

It’s pretty easy to see that the individual steps of DC3 run in at most linear time. Even the most intense sorting, the radix sort in the “sample” sort phase, sorts in O(n) time. It radix sorts the first 3 letters of only two thirds of the suffices: f(n) = 3(2n/3)= 2n -> O(n). Note that radix sorting takes time equivalent to the number of strings to sort times the number of characters to sort, or:  f(n) = n*numLetters.

Update: I have built the algorithm and it is fast as promised! I’m working on the implementation write up and will post the source code soon when I’m done with the write up.  I used the DC3 sort to speed up the Burrows Wheeler Transform. I ran two different versions of Burrows Wheeler, BWTArraysSort and BWTDC3Sort, to transform pipi.text(the first 500,000 digits of pi repeated twice). BWTArraysSort uses the java Arrays.sort(String) method which runs in n*log(n) time. BWTDC3Sort uses a fast linear time algorithm. Check out the results. I’ll be posting code and explanation of how it works soon 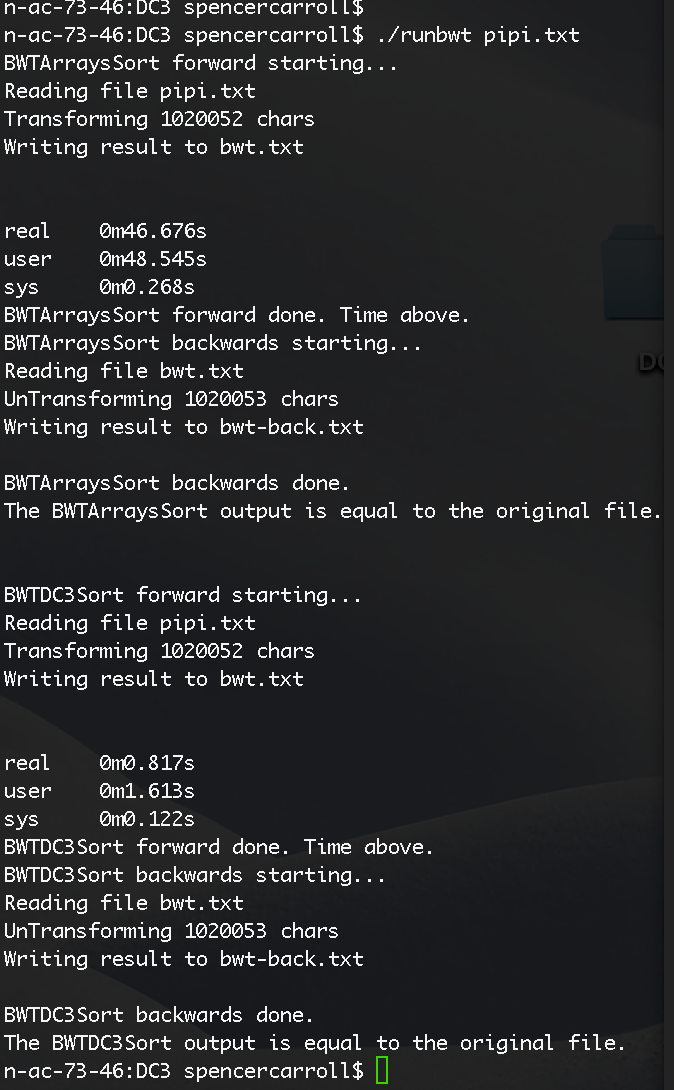